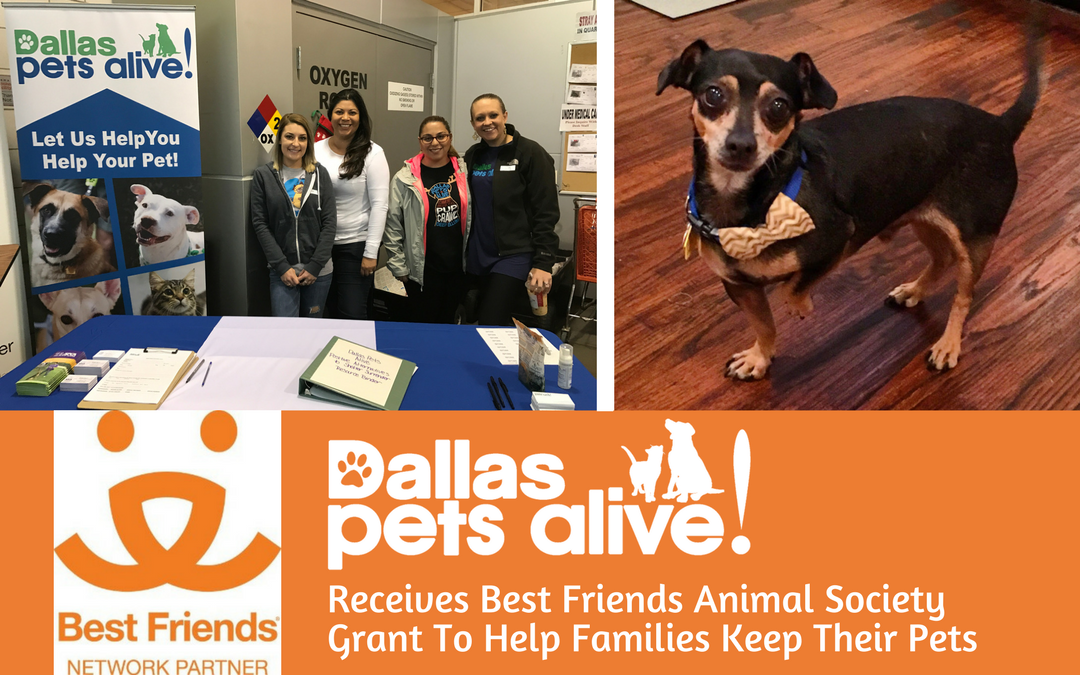 Dallas Pets Alive! received a grant from national animal welfare organization Best Friends Animal Society. The grant is for a program designed to help families keep their pets when medical or behavioral issues could result in the pet being relinquished.

“We thank Best Friends Animal Society for helping us keep four-footed family members out of shelters,” said Haley Edman, director of marketing for the animal rescue organization in Dallas. “Too often a family is put in the sad situation of letting go of a beloved pet because they can’t afford the medical care, or maybe the animal has some simple behavior issues that a consultation with one of our experts could help resolve.”

Dallas Pets Alive! is an active partner in Best Friends No More Homeless Pets® Network which offers help and support to animal rescue groups and shelters that save lives in their communities.

Dallas Pets Alive! is a volunteer-driven, nonprofit rescue group dedicated to promoting and providing resources, education and programs to eliminate the killing of companion animals. DPA focuses on pulling pets from the rescue list at Dallas Animal Services and on proactive measures to reduce the number of animals entering the city shelter with their Trap, Neuter and Release (TNR) and Positive Alternative to Shelter Surrender (PASS) programs. DPA’s goal is to one day make Dallas a no-kill city.

Best Friends Animal Society is the only national animal welfare organization dedicated exclusively to ending the killing of dogs and cats in America’s shelters. A leader in the no-kill movement, Best Friends runs the nation’s largest no-kill sanctuary for companion animals, adoption centers and spay and neuter facilities in Los Angeles and Salt Lake City as well as lifesaving programs in partnership with more than 1,600 rescue groups and shelters across the country. Since its founding in 1984, Best Friends has helped reduce the number of animals killed in American shelters from 17 million per year to an estimated 4 million. By continuing to build effective initiatives that reduce the number of animals entering shelters and increase the number who find homes, Best Friends and its nationwide network of members and partners are working to Save Them All®.

To become a fan of Best Friends Animal Society on Facebook go to: