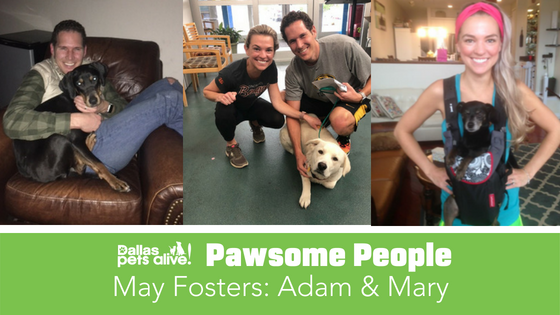 “Adam and Mary have been fosters with DPA for a little over 2 years. They are very open-minded individuals who tend to go for the dogs that are overlooked in the shelter environment. There are many times where Adam and Mary are willing to open their home to a dog that wasn’t even on our radar. They are the types of people who truly act upon the idea that no dog is left behind, regardless of how they may show in a shelter environment. Not only are they great fosters, but they are all around fantastic people and we are so lucky to have them on the DPA team!” — Stefanie Steiner, Foster Director, Dallas Pets Alive!

That’s why Adam & Mary Crossett are DPA Pawsome People! Learn more about them:

How did you get involved with Fostering with DPA?
We had fostered a couple dogs with another organization and felt a little bit like we were on our own in terms of networking and marketing the pups. Seeing DPA’s social media, events, and overall organization made us want to give fostering another chance with the hope of a smoother experience.

Tell us about a few of your fosters.
Our first DPA! foster was Tater, and we were looking for a chill canine who could integrate into our two dog household with the least amount of effort. Tater was not going to win any beauty pageants, but he assimilated beautifully within a few days and was an easy foster. After about a month under our roof, he received an application from a young couple who fell in love with him. He’s currently spoiled rotten and can be found on Instagram under the handle @thecouchpo_tater.

Another of our fosters was Adele. We arrived at Dallas Animal Services to look at a few dogs in the DPA! album, and last on the list was an unnamed pit mix. We had not fostered a pit before, and the stereotypes were running through my head. As DAS was about to close and it looked like this unnamed pit might not survive another day, we (Mary) decided she was coming home with us. Oh…by the way, we learned that she was heartworm positive right before tagging, and she was the first heartworm positive dog we had fostered. DPA! was great with nearby vet options and the treatment was actually pretty easy. Adele was a loyal and loving girl who liked to romp with our resident hound. While she was strong and tough looking, she was a big ol’ cuddlebug who just wanted to please her people. She dispelled a lot of pit bull and heartworm myths for us. Her adoption occurred following an adoption event where an older couple fell in love with her.

First is Nellie Bly. She was pulled from the shelter on the day she was scheduled to be put down because she had come down with pneumonia. After 3 days of treatment and a couple days of pills, she was back to 100%. Adam had mentioned her to a co-worker in New Jersey who knew we fostered dogs, and she comically mentioned, “well I’d adopt her if she was here!” Fast forward to few weeks later when DPA! contacted us about a transport opportunity to a partner rescue in New York. Nellie went on the transport and Adam gave his co-worker the heads up that she was headed that way. The co-worker met Nellie in New York City and adopted her on the spot. Nellie is officially a spoiled Jersey girl!

We spotted Olaf in the DPA! dogs in need album. He was in the quarantine area of Dallas Animal Services recovering from an upper respiratory infection. From the time we pulled Olaf, Mary’s mother was immediately interested in adopting him based solely on the fact he was some sort of Labrador. After growing up with a purebred lab, the family grew to love the breed. Olaf was all lab in behavior, as he was a big goofy kid who never met a stranger. Mary’s mother adopted him, and he’s currently spoiled rotten with a yard full of squirrels to terrorize. It’s a big win for the cause, as someone who had not previously considered mutts or adoption was able to find the perfect fit through DPA!

What do you love most about fostering with Dallas Pets Alive?
The focus for the foster family is on fostering. DPA! volunteers are doing so much work behind the scenes on marketing your foster dog, events, and the medical side that it’s much easier to bring a new pup into your household than having to bring in a new pup AND worry about all of those other things yourself. This volunteer community is made up of not just people with big hearts, but people who are responsive and accountable along the way.

What would be some words of wisdom to new DPA Fosters?
Fostering a dog is not always easy (it gets easier over time), but you’ll never regret saving a life.

Give us a fun fact about you!
Mary – she does not have a sense of smell.

Adam – he played college football at the University of Missouri and briefly with the Indianapolis Colts.

Be like Adam & Mary – apply to be a DPA foster today!