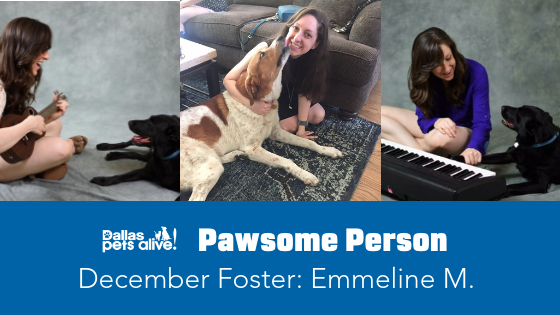 “Emmeline has fostered with DPA a few times now and man does she know how to get her fosters adopted! Emmeline has the gift of the written word and ability to make others feel connected to her foster animals. You may have seen some of her writing when her former foster, Lazarus, was looking for his FURever home. She does a great job of keep you informed and intrigued on how her foster’s are doing by sharing their story from the dog’s point of view. We quickly brought her over to the volunteer side where she uses her talent to write some of those amazing animal biographies that you see online. Emmeline is such an asset to this organization. She always plays a part in the village that is takes to save a life – whether it is stepping up to temp foster for a few days or transport to/from events or the vet. We are so lucky to have her on our team!” – Stefanie Steiner, Dallas Pets Alive! Foster Director

That’s why Emmeline Miles is a DPA Pawsome Person! Learn more about her below:

I got involved with DPA this summer after watching the intake number at DAS–and, consequently, the euthanization rate–continue to rise. Back in 2011, I went to DAS to adopt one of their EOD dogs (then called VIPs).  Nearly eight years later, I can honestly say adopting was the best decision I’ve ever made. My resident dog, Chloe, is the light of my life. I’ve watched Chloe go from a terrified, anxious one-year-old with a flea infestation to a confident, calm, trained therapy animal who works with children and genuinely loves people.  I wanted to give other dogs the chance to have their own transformation, and I love that DPA is able to rescue the dogs who wouldn’t otherwise be adopted and nurse them back to health.

When my life prevents me from fostering, I like to temp foster–and to write puppy bios!

My first foster was a GIANT Great Pyrenees/Lab mix named Lazarus. My foster app was approved in the morning, I visited him in the afternoon, and then I emailed  tag@dallaspetsalive.org on the night he was scheduled to be put down.  I spent the whole night wondering if I’d missed my chance before Danica told me he was safe and ready for pick-up! Lazarus was heartworm positive and had been surrendered by his owners because he was an escape artist, and they decided to turn him over to the city rather than pay the fine for him being off-leash. We spent two months together where he beat heart worm and learned to trust again. Crate rest was really difficult for Laz; he didn’t like being cooped up, and he would get extremely anxious when separated from people. He barked and whined endlessly until he discovered the Big Bang Theory. The laugh track soothed him to sleep! Ultimately, he was adopted by an incredible family with a GIANT backyard and a tiny, furry foster sister with whom he plays endlessly.

After Laz, I took in little Josephine. Jo was another pre-lab puppy who was suffering from ticks, a URI, and postpartum depression. Josephine needed about a week of solid decompression time before she began to believe that her foster human was there to give her treats and not to torment her. We spent many afternoons sitting together by the crate. I’d sit in front of the door, criss-cross-applesauce, and she would run into my lap, snuggle, get scared, then run back into the crate. Watching her emotional journey from sick, tired pup to bright, energetic love-bug was really rewarding!

With both of my permanent fosters, I had to give a lot of medication. I take great pride in keeping those pills in a visible place and watching their quantity diminish. It’s like a visual representation of the healing process. When I finally get to throw those prescription bags away, I feel like both of us have accomplished something important.

I’m biased toward my own adoption story; when I found Chloe, she’d been in the shelter for three months, and she was scheduled to be euthanized. When I first saw her, she was hiding in the back corner of her crate. She’s black, and she was pretty shut-down in the shelter environment, so the attendant told me the chances of her being adopted weren’t great. The volunteer leashed her and brought her into the play area. Once the leash had been removed, Chloe actually LEAPT into my arms. Needless to say, she made my choice for me. Almost eight years later, I’m still profoundly grateful that she chose me.

As for DPA adoption stories, Jo’s adoption was really special to me. She had some visits that didn’t pan out, and I was worried she’d never find the right family. After a heart-to-heart with our amazing adoption coordinator, Jonathan Ray, I decided to go with my gut and essentially deny an application. During my drive home that day, I had a long conversation with God about the kind of family I thought Jo needed. I asked for a young girl who would be perpetually patient with Josephine, who would make Jo the center of her world, who would let Jo sleep on the bed and feed her turkey bacon and help her continue to trust. Literally the NEXT DAY, Jonathan told me an app had come through. The applicant? A college-aged girl looking to finally adopt a dog of her own. I periodically get videos and photos from the girl and her roommate, and I’m proud to say that Jo’s new family subscribes to BarkBox, feeds her turkey bacon, has given Jo her own pillow & blanket on the bed, and spoils her rotten.

Dogs have a beautifully unique capacity for unconditional love. Without a doubt, the best part of fostering is putting these pups in a situation where they can finally receive the kind of love they’ve been so freely giving their whole lives.

What would be some words of wisdom to new DPA Fosters?

When people find out that I foster, the first thing they say to me is always, “Oh my God, I could never do that. I wouldn’t be able to give them up.”

Giving a dog to his or her new family is REALLY hard.  There are lots of tears. Sometimes, it feels a bit like emotional terrorism. BUT at the very beginning, my best friend told me, “Every single day you give them is a day they weren’t going to get–and that’s a pretty amazing gift.”

Animals give us SO MUCH on a daily basis. If we can give even a little bit of that back to them, I think that makes the animal’s life immeasurably better, but it also makes US better–and, in turn, I think it makes the world is a better place. So, when it gets hard, just remember that, and you’ll be fine.

Dog-related: when I have fosters, I send updates from their point of view. (Ridiculous, I know.)

Be Pawsome like Emmeline. Apply to be a Dallas Pets Alive! foster today!