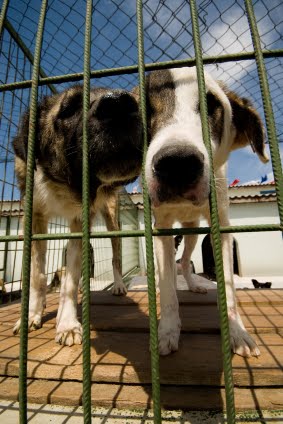 I once gave up a chance to get my first dog — something I’d been waiting for years to do — because after a lot of debate about which breeds were acceptable, the ex-boyfriend and I who were planning to get the dog together reached an impasse.

To my horror, after days of discussions, I realized we were talking about two very different things. He was talking about BUYING a dog. I absolutely refused to buy a dog from a breeder (or anywhere else), no matter how reputable they were. The only option in my mind was rescuing from a shelter or rescue group.

I wasn’t being an argumentative girlfriend.  This was something I absolutely refused to compromise on. It’s a principle. My mind was, and always is, on the millions of shelter pets euthanized each year, dying needlessly and too soon, lonely, terrified and without having the chance to experience a loving home. The thought brings me to tears.  How could I ever make a decision to bring a new companion into my home that wasn’t one of these many animals in dire need, facing the end of their short lives?

Apparently and shockingly, however, I am not in the majority. Nationwide, only about 30 percent of dogs in homes come from shelters.

The word euthanasia is from the Greek for “good death”.

Wikipedia defines animal euthanasia as “the act of humanely putting an animal to death or allowing it to die as by withholding extreme medical measures. Reasons for euthanasia include incurable (and especially painful) conditions or diseases, lack of resources to continue supporting the animal, or laboratory test procedures. Euthanasia is distinct from animal slaughter and pest control, which are performed for purposes other than an act of mercy, although in some cases the procedure is the same.”

Mercy. Good death. These terms refer to putting an end to suffering. In some extreme medical and behavioral situations, euthanasia is certainly the only viable option, but I am of the opinion lacking resources to continue supporting the animal is an unacceptable reason for suffering.

Let us not be mistaken here, though; the blame cannot be placed on shelters who are lawfully required to accept all unwanted animals and are thus ill-equipped to handle the overpopulation problem. There’s a common misconception that “kill”shelters are villains. These facilities have limited space and funding and animals are brought in at an average rate of more than 20,000 per day, or 7.6 million every year.

Just take a minute to let your brain process those numbers. Fewer than 1/3 of these pets are claimed by and reunited with owners.  Thankfully, gone are the days when the stray dogs of a city were collected from the streets and exterminated by means of mass steel cage drownings or bulk gas chambers — but what we are left with is a gross overpopulation of homeless animals in shelters which cannot possibly house and care for them all.

The animals are given a small window of opportunity to find homes. Even the “lucky”ones who escape an early death are anything but lucky if they aren’t quickly adopted. Many dogs who stay too long in shelters eventually go kennel crazy. They bite and scratch themselves until they are raw. They walk circles until their paws bleed. They become incapable of socialization. They are broken and often deemed no longer fit for adoption.  They either become “special cases”or sad statistics. Can these deaths be considered good or humane?

The fault truly falls on us, the general public. As long as we allow and encourage puppy mills, hack breeders, internet dog sellers, irresponsible pet owners and dogfighters to keep pumping out animals who eventually end up on our streets or chained and mistreated in back yards, we are to blame.

There are so many pets in need of loving homes who are never rescued because people choose other ways to get new companions. Instead, young, healthy, beautiful animals are replaced with the next day’s incoming batch and euthanized before they get their chance to meet the ideal forever family. Only slightly more than one third of the animals brought into a shelter are adopted.

How Can We Be More Accountable?

You might be asking yourself, what am I supposed to do about it?  Let’s take a look at how some of our responsible friends are contributing to the cause.

In recent years, Los Angeles passed a Mandatory Spay/Neuter law.  This legislation requires that all pets be registered and spayed or neutered.  The only legal way to keep an animal intact is to purchase a special permit, the proceeds of which go directly to a program providing low-cost spaying and neutering services to low income families.  Additionally, to breed an intact dog, the owner must purchase a breeding license, and each household is only allowed one litter per calendar year.  If there is a specific four-legged breed you adore, don’t underestimate the power of the internet search and absolutely try going through breed-specific rescue groups before seeking out a breeder.

In Reno, Nevada, participation from the community allowed for two of the city’s largest animal shelters to go “no-kill”without additional funding from the local government.  Volunteerism (both in shelter and fosters) almost doubled, area veterinarians and other businesses offered discounts as incentives for adopting, and private donations for the cause increased.  The euthanasia rate in the city has dropped below ten percent, which is astoundingly minuscule compared to the national average of fifty percent.  To get a piece of the making-a-difference action, visit the DPA! Volunteer page or contact your local shelter.  If you are considering becoming a foster, find out what fostering entails and a foster application here. If you fancy yourself an animal philanthropist, or a less “hands on”approach is more your speed, check out Other Ways to Help.

Making a Difference at Home

The simplest way you can contribute to a solution rather than being part of the problem is to spay and neuter all of your dogs and cats.  That’s a no-brainer, right?  I wish.  Only 10% of animals received by animal shelters are spayed or neutered.  Want to do more?  Spread the word, talk to your lawmakers, take action in your community —but at the very least, please take action in your own home.

Finally and most importantly, RESCUE RESCUE RESCUE!!!  DPA!adoptable dogs and so many other wonderful animals across the country are available and waiting to share their love and lives with your home.  Some people, like my ex, are afraid to adopt shelter animals because they are mistakenly afraid they will be less in control of temperament, qualities, and potential health and behavior issues of rescues than they will be of purchased dogs.  However, the rescue and adoption processes (read How to Adopt a Dog) are designed to place carefully assessed animals in the right home based on compatibility, temperament, and needs.  Some rescue dogs certainly require more energy, research, time, patience, and love than others while they learn and adapt, but the rewards are even greater and more precious.  As someone who adopted a “special case”, I have learned, above all, hopelessness does not have to be a terminal condition.