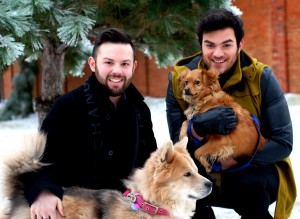 Congratulations to the winners of the Dallas Pets Alive! Puppy Love contest and thank you to all who shared your love stories with us!

First place winner of a doggy photo-shoot with Dog Biscuit Photos is Santana and her wonderful adopters Eric and Jeremiah!

Here is their puppy love story (written by Santana herself): 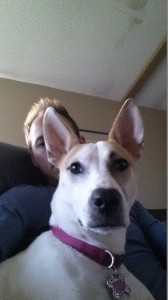 It was a long 15 dog months from my first human birthday in January to when I was taken to a beer festival in Fort Worth. Eric and Miah showed me so much love when I first jumped into their laps it was love at first paw. At the end of the event I wasn’t sure what was going on because the car ride home was to some place new, but when I walked into this new house there were 4 little odd looking dogs; Candy, Bobo, Kilala, and Mr. Mistoffelees and my two new daddies. These odd dogs made mew sounding barks, but I still loved to play with them all the same. I loved this new house I was in. They had toys that squeaked when I bit into them and a great yard for me to do my speed demon laps around. I was home.

Over the last almost 5 dog years, 9 months for those humans, I have come to love a great routine. I wake up and go for a walk then I have a yummy breakfast. Then to prevent me from eating the whole house I get to go into my kennel while Eric and Miah go out into the world. I know it is time to go in because they go and get two treats and my squeaky bone. I go zooming into my day spot and remain there until they get home from their adventures. I then get to play with these odd little dogs and my daddies for a bit until dinner. After dinner I go for another walk, and some more play time both with my masters and the dats as I call them. Then when it is time for the humans to sleep, and weird they only do it once a day, I find a nice spot in between them in a big bed and we sleep all night until the sun comes up and then we do it over.

They spoil me by giving me all these great toys that make fun noises. 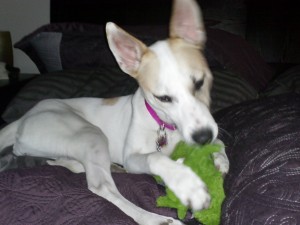 Some of them I destroy in just moments, but some of them are so hard for me to get the insides out it takes me a long time. These are my favorite as I get to play along with them. I love to make fun noises and my daddies seem to always get a kick out of them. I love to romp and play and in my home I am definitely the alpha. I look forward to the next many years, dog or human, that I get to spend with my family. I am the luckiest dog in the world.

Brandon and Christian shared their puppy-love story with Penny, and this is one we’ll never forget!

The story starts I came across a photo of the most gorgeous beautiful brown eyed girl (by girl I mean dog) on Instagram. Her name is Penny. I immediately commented on the  photo stating  that I would like more information, as it stated she was a new rescue.

I currently have a four year old Tibetan Spaniel and Penny is around that same age – it’s perfect! Penny is a Chow-Husky mix with the happiest smile (yes, she smiles!) and the prettiest eyes I’ve seen (you really can’t say no to them).

One Saturday Penny came over for a visit to our home and it was confirmed, she was our princess. She was shy and calm but I knew that Kenzie (the Spaniel) and her would be great for one another. The day she was dropped off at her furever home, our home, is one for the books!

It was a sunny Saturday morning in September. My partner had to work that day but I was off and looking forward to spending time with our new furry daughter. A week prior we picked her out a new hot pink collar, leash, and name tag which I put on her that morning (this was not the best idea as you will soon find out). That day we bonded, played, and napped (oh, to be a dog). Before Christian got home I took the dogs out again. On the way back inside Penny heard a noise, I was in front of her, before I knew it her head slipped out of the collar and she was on the run! I was panicked! I immediately started chasing after her. 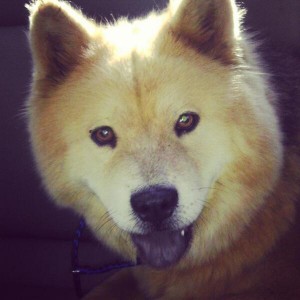 I rang Christian as he was pulling in, he got out of the car and we stayed on the phone as we ran to different areas of the neighborhood (was she a greyhound in her past life?)! After about thirty minutes she had laid down behind an AC unit. We took this moment to call the foster, she rushed over there from the opposite side of town (a saint!). During that time we sat in front of the unit making sure she stayed put. Finally, the foster arrived to save the day, she walked up to Penny, Penny came straight to her. She then picked her up and I then put her (original) collar back on her.

From day one Penny has been our little ray of sunshine. She had to stay true to her sassy character and play hard-to-get with us
(literally!). Now she is an angel, a sassy diva angel, but an angel nonetheless. Kenzie and Penny adore each other just as much. She loves to talk and greet me at the door and we have bonded immensely during the past five months. We are still learning more about her personality daily and look forward to this journey with Penny!

In 2009 I moved to L.A. to go back to school. What I hadn’t put much thought into before the move was that this was the farthest I had ever lived from my family and friends, half-way across the country. I made this move knowing absolutely no one out there. Of course I made friends and plenty of memories while working toward my degree, but after a year something was still missing. I decided that it was a dog. I wanted to adopt a dog, not a puppy, because everyone wants a puppy. 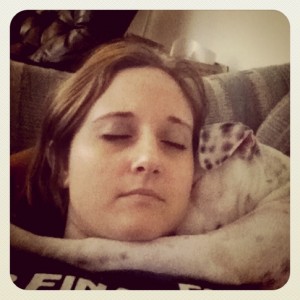 I searched the LASPCA website and came across a cute Jack Russell Terrier who had been removed from an abusive home.

She was the one! I made the trip to the LASPCA and once there I was told that she had not put on enough weight to be adopted yet (the home she was removed from was withholding food & water as well as beating their dogs). They did inform me that she was not the only dog removed from that home and brought out her only remaining puppy. I thought “oh, no, not a puppy, I want to rescue a dog”.

He shook as they placed him on the floor. I slowly sat down on the floor. He cautiously walked over to me and climbed right into my lap and gave me a little kiss. He then curled up and fell asleep.

That was it, he had to be mine. It was love at first lick.

I was told that he had not yet been neutered so I wouldn’t be able to take him until the next week. A week, how could I possibly wait a whole week for this little guy?! A week of crazy anticipation

went by and it was finally time to pick him up. He became my little Valentine’s Day gift to myself. His surgery and pickup date was February 14th.As crazy as it sounds Petey changed everything for me. He became my family away from my family. L.A. finally felt like home. I’ve always felt rescue dogs are grateful. It’s like they know you saved them. 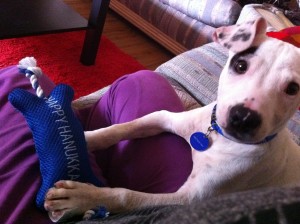 Petey is so loving & protective of me, I couldn’t have asked for a better dog. He’s like a cuddly little shadow. He always wants to be with his people. He’s never met a dog he didn’t like. He’s the baby and boy does he know it. He’s the perfect mix of cuteness, energy, and snuggle bug. He might be little, but he has a big personality and big ears to go with it. I may have rescued him, but he rescued me too.

Side note: Petey’s mom Daisy found a home later on too!

Best self-given gift ever! Actually, best gift of any kind ever!

THANK YOU to everyone who shared their stories with us, we had the best time reading and the hardest time picking winners! We hope you enjoyed reading these puppy-love stories as much as we did.