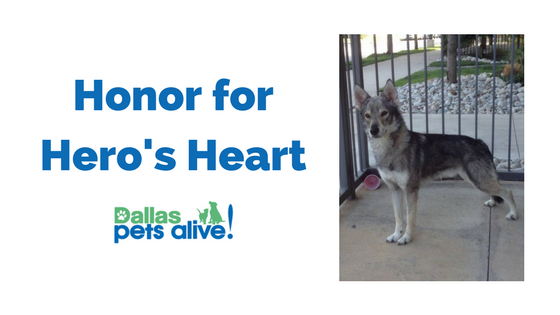 If you cross paths with a heartworm poster at a vet’s office you’ll know that you would do anything to avoid this pain for your pet. A 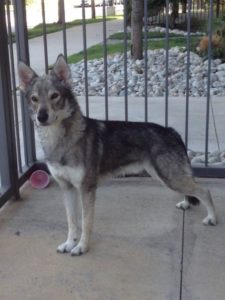 heartworm is a roundworm that can grow to be twelve inches long that lives in your pet’s heart and can cause fatal side effects, even after they are removed. Heartworms are spread through a mosquito bite and if left untreated the heartworms can accumulate into the hundreds inside a pet’s body. Every state in the US has mosquitoes therefore every pet is at risk. This is why prevention is so necessary for every cat and dog. In 2017 Dallas Pets Alive treated 80 dogs for heartworms at a cost of about $400 per dog, meaning approximately $30,000 was spent on this terrifying disease. Not only is that a large amount of money, but it is also too many lives that were affected negatively – including our friend, Hero. Read below for a biography about one dog who left this earth too soon.

“Even though he looked like a coyote (he might have been part coyote), Hero was far from wild. We adopted Hero when he was two years old – at first, like many rescues, he was incredibly nervous and skittish. It took roughly six months for his confidence to develop, and while he never transformed into a bubbly/rambunctious pup, his personality started to shine.

Hero was a young dog with an old soul – he was incredibly smart, and always felt calm and collected. One of my favorite moments happened after I was watching YouTube videos of dogs and cats chasing laser pointers around rooms – I excitedly purchased my own laser pointer, and couldn’t wait to partake in this new channel of entertainment with Hero. My expectations quickly fell flat when the laser arrived and I pointed it in front of Hero – he looked at the red dot, mildly curious, then maybe two seconds later, he followed the invisible line of light back to the pointer in my hand, and his curiosity instantly diminished. He calmly laid down and started napping.

This is one of countless fond memories I have of my best friend, but this is a quick bio, not a comprehensive memoir, so I’ll fast forward to why this foundation is a perfect send-off for Hero.

Hero loved other dogs – especially pups around his size that could keep up with his speed and agility. With or without a leash, Hero never left my side on walks; the only time he’d skip a beat or lose himself in excitement, happened when he was surrounded by other dogs at Mutts Cantina. I loved watching him backseat his old soul and let his inner puppy take control – a competitive game of fetch topped Hero’s list of favorite activities (napping was number two).

Hero would be honored to know that his memories have helped spark a new foundation to keep his friends on earth healthy and happy. ”

Hero was so well-loved that his owner received two gifts in Hero’s memory which was a donation to Dallas Pets Alive, coming to grand total of about $2,000 after the initial gift was matched by his company, Salesforce. Another gift that Hero is receiving is one that his owner wants to share with all of our DPA animals and supporters.

We are co-hosting a match campaign in Honor for Hero’s Heart that will be held at Mutts Cantina on April 5th during Yappy Hour from 4-7 PM. Come to celebrate the life of Hero with all of his closest dog and human pals to kick off the donation campaign that will occur from March 22nd- April 22nd. Our goal is to reach at least $7,000 and to treat about twenty cats and dogs with the money that is raised. Donate not only for Hero, a friend to many, but also for all of the other pets that want a chance at survival in order to stay your companion for many years to come.