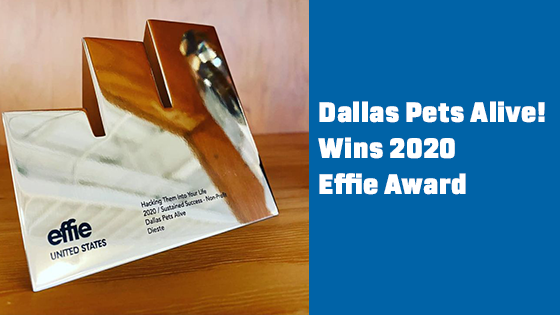 Dallas Pets Alive! was awarded the Bronze Non-Profit Sustained Success Award at the 2020 Effie U.S. Summit & Awards Gala on Oct. 1. The Effie Awards recognize and celebrate the most effective marketing efforts of the year; the Sustained Success Effie is awarded to outstanding marketing and communications efforts that have experienced sustained success for more than three years.

Dallas Pets Alive! was celebrated for the “Hacking Them Into Your Life” campaign, spearheaded by Dieste, Inc.

In 2012, many Dallasites still preferred purchasing a pet rather than adopting from a shelter, making the euthanasia rate for shelter animals in Dallas 63%.  From the beginning, we knew we that to change people’s perceptions of shelter animals by helping them see that the happiness that comes from adding a shelter pet to your life cannot be bought.

To this end, DPA and Dieste created a series of social-media and digital-focused campaigns that put shelter pets at the forefront of potential adopters’ minds. First was the Muttbombing Instagram campaign, which took people’s selfish by nature selfies and repurposed them for good by hacking them and inserting a real shelter pet into the image.

This was followed by the Adoptable Trends campaign, which built on the idea of “hacking them into your life” by renaming real shelter dogs every day to match trending topics. So, as people searched or shared something using a trending hashtag they would be met with targeted ads and profiles of a shelter pet.

The next major follow-up campaign was Spotyplay, an evolving Spotify compilation of playlists that matched specific music tastes with the nature and personalities of adoptable DPA pets (as described in their linked adoption profiles). As potential adopters got their daily music fix through Spotify, they would be met with the perfect dog for them based on their music tastes.

These campaigns provided DPA inventive opportunities to position shelter pets above their purebred counterparts year after year, while also changing the narrative about rescue animals from negative to positive. More importantly, they contributed to the 48% euthanasia rate decrease and 130% increase in Live Release Rate.