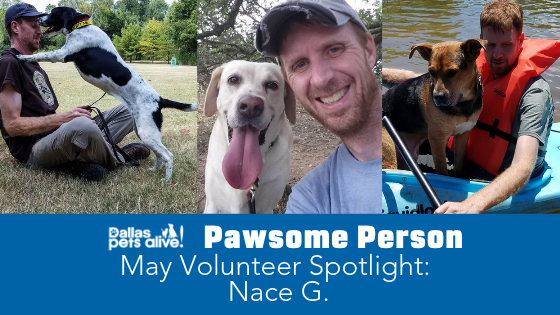 “I’m so thankful to have Nace at the helm of our RAD (rent-a-dog) program. Since taking on this new role just over a month ago, Nace has worked his tail off to secure volunteers, build a strong shelter relationship, help identify animals that could use the extra exposure, and even dig up some new event venues. His attention to detail, innovative thinking, and enthusiasm for lifesaving are going to help us reach new heights and I’m thrilled to have him on board.” -Elina D. DPA’s Rescue Director

What is your current role?

Currently, I’m the RAD Coordinator. RAD (Rent A Dog), is a program where we borrow pups from Dallas Animal Services for 24 hours to try to find them a foster or adopter. Our fosters pick the pups up from the shelter on Friday and take them to a DPA adoption event the next day before returning them to the shelter if they don’t find a foster or adopter.

How did you get involved with volunteering at DPA?

My partner, Amanda, and I decided to become DPA fosters in 2017 after seeing the heroic actions of DFW rescue groups who were rescuing animals from flooded shelters in Houston and transporting them to Dallas. We signed up to be fosters in August 2017 and, after foster failing on our second pup on my birthday in August of last year, we reached our 2-pet limit at our apartment complex. I felt we had failed the animal community as well as DPA and I began looking for other ways to help while Amanda worked on finishing up her degree. I transported a couple of pups to vet appointments for their foster parents, but it didn’t fill the void. I joined the rescue team in January, and it was on my first day doing evaluations that I met Pearl and Lulu. When we lost Pearl on Valentine’s Day to distemper, the pain I felt became my driving force to do more and the final pieces came together when I was asked to take on the role of RAD Coordinator last month. Since then I’ve also began taking steps to begin foster vetting and to become an event lead.

What are you most passionate about at DPA?

Helping to grow RAD until multiple events are required over the course of a weekend to accommodate the demand! Melanie Gunchick did an amazing job with RAD in 2017 and RAD’s success today would not be possible without her.

I love to hike and have logged miles at Enchanted Rock, Colorado Bend, Dinosaur Valley, Palo Duro Canyon, Guadalupe Mountains, Arches, Canyonlands, Dead Horse Point and Zion.   My favorite is Guadalupe Mountains National Park due to the rich biodiversity. With one single turn on the Guadalupe Peak Trail, the scenery changes instantly from dry desert to a thick forest of Douglas Fir, Pinyon and Ponderosa Pine.

Be Pawsome like Nace. Apply to be a Dallas Pets Alive! volunteer today!