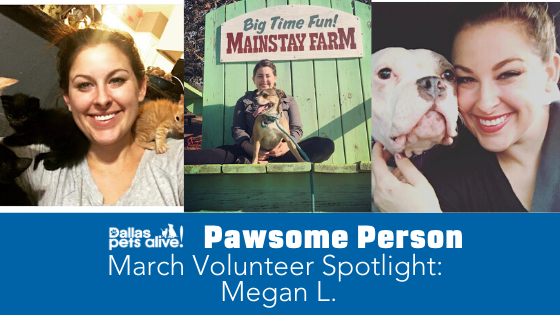 “Megan L. has been an invaluable member of DPA’s rescue team for over 5 years! She has a keen eye for finding the shelter animals that need us most and getting great videos of them. She also has a creative and wonderful way of writing about the animals she visits that helps attract fosters. In addition to her rescue work, Megan has been helping DPA as a foster, event lead, and many other ways that can’t even be counted. I really admire Megan’s emotional intelligence and ability to take a break when needed – I think this has helped with her longevity on the team and her ability to help us save lives.” -Elina D., DPA’s Rescue Director

Megan’s dedication as a volunteer in numerous capacities does not go unnoticed and she is valued in our community. Read more about her below:

What is your current role?

I am currently a member of the rescue and events teams. I am also on the PUP Crawl committee.

How did you get involved with volunteering at DPA?

5 years ago, I saw a picture of a dog that DPA had pled on Facebook and thought about fostering him. The dog ended up getting a foster, and I kept lecturing myself that I should have stepped up. I told myself that the next time I saw a dog, and felt that way, I would step up. A week later, I saw another Facebook plea for a hound mix that was terrified in the shelter environment and was considered ‘urgent’. I bit the bullet and went to pick her up that day. She was cowering in a corner and as soon as I picked her up she peed all over me in fear. She was perfect. I later got into the rescue side of things, after being a foster for a while, and wanted to help out in different ways. I also joined the events team about 3-4 years ago.

What are you most passionate about at DPA?

I am most passionate about the rescue side of things and our role with local animal shelters. Specifically, I‘m a fan of dogs that don’t look like dogs… You know: seals, hippos, etc. I am a sucker for a nice front ‘turnout’ or a squatty little build. I am also drawn to scared dogs. Basically if a dog shows ‘poorly’ for a certain reason, especially one that they can’t control, (appearance, fear, etc.), I am going to automatically launch their campaign.

Find what role works best for you. Don’t force yourself into a role you aren’t comfortable with, just because you think you should be. Some people shouldn’t go to the shelter in person, because it is too upsetting for them, and that’s okay. There are a ton of virtual or in-person event roles available that are just as important. Can’t foster long term? Temporary fosters are ALWAYS needed. You can get over your puppy cravings with a weekend of ‘all-nighters’.

No role is too big or too small. They all serve our goal of making Dallas a no-kill city.

At one point I had 14 animals in a one bedroom apartment…Can you say, “Accidental litter of 8 puppies”?

Be Pawsome like Megan. Apply to be a Dallas Pets Alive! volunteer today!