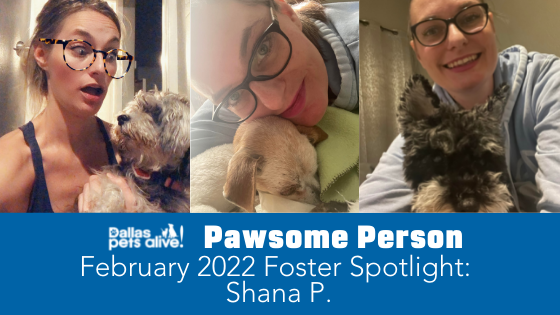 “Shana has taken on two hospice fosters, after foster failing her DPA foster before that. Her first hospice foster passed on a few months ago and she most recently pulled the 16 year old chi-mix (Charmy) from DAS that has too many issues to list. Shana pulled her knowing she would be in hospice, and probably not have her very long, but absolutely did not want her dying in the shelter as an owner surrender. She has the biggest heart and while she may not foster as many dogs as other fosters do, she has really stepped up and helped ME when I was down with Covid 15 months ago and needed help with the dogs, she has helped with transporting fosters to appointments…she is always ready and willing to help anybody in need (in addition to homeless animals!).” -Jey L., DPA’s Rescue Director

DPA! PAWSOME PEOPLE: Shana P. is a DPA! PAWSOME PERSON! We’re really proud to showcase Shana this month and her perseverance and commitment to the animals in her care.

In late June 2019 I was looking at Dallas Animal Services website to adopt a companion for my dog Porter (RIP). The dog I had picked was Rescue Only. I was advised by DAS to apply to DPA. She put in a good word to get my application expedited. After my phone interview I was approved, but the dog had already been tagged by another rescue. It wasn’t until July 7, 2019 that I tagged my first foster.

Masie was my first foster. I had named her after an actress that played in Game of Thrones. I was able to pick Maisie out, from any dog, at Mesquite animal shelter because they were over capacity. Maisie SHOULD have been a very easy first foster, schnauzer mix, small, adorable, middle age. When I got Maisie home I quickly realized she had some medical issues. Maisie was approved to go to Mazie’s Mission, and sure enough, she had the largest bladder stone the vets had ever seen. It was the entire size of her bladder. It was shocking. Maisie was then returned by her first adopter, and unfortunately passed away only a few months after going to her FurEver home. I took a big break after Maisie. The shock of everything that happened, and then it was about 3 months later when Porter was diagnosed with congestive heart failure.

Asta came to us in December 2021. I must be a sucker for schnauzers because I see them and I can’t say no. After Asta’s freedom ride, it was clear he had some big neurological issues. Asta kept doing counter clockwise turns, and would run into the walls. This had nothing to do with his vision. He was diagnosed with Vestibular Disease; however we knew there was a chance it was a brain tumor. About a week later we were back at the vet with a very different Asta. Asta was extremely distressed, scared, anxious. We took him home that day with some meds to sedate him to see if it helped. The next morning we made the choice to let Asta be at peace. We only had Asta 11-13 days. Everything happened so fast, but we saw the change in him, and got him back to the vet ASAP. Asta was my first hospice. After Asta I knew I was meant to help the small hospice babies.

Our current fospice is Charmy. She was literally on the brink of death after being dumped by her owners at 16 years old. We picked her up from DAS, and took her straight to the vet where she stayed overnight. I wasn’t sure that she would ever come home. I had to check a few times on the way to the vet to see if she was even breathing. After getting IV fluids this girl made a comeback. Currently Charmy is eating, drinking, sleeping very well. She has a plethora of medical issues, including the use of her back legs. She has severe issues with multiple discs in her back. That doesn’t stop Charmy from dragging herself unassisted, or attempting to use her back legs with some help. She has a vet visit coming up where we will discuss some simple surgeries to help improve her quality of life. I want to see if she would be a good candidate for a wheelchair as well. She LOVES going outside, and she wants to be as independent as possible. Her tail wags the whole time she is outside. She is inspirational.

I am still new to fostering, I have only had 4 fosters, and 2 were/are hospice. Moxie is our foster fail, (she is schnauzer.) I lost my dog Porter October 2020 to congestive heart failure. I took it very hard, he was my best friend. It was less than 3 weeks after losing him when I looked at DPA’s shared album of dogs that needed a foster. I took one look at Moxie’s photo and I KNEW she had to come to us. I was waiting for my boyfriend to get home, even looking though the blinds, so I could bombard him with my reasons why we HAD to tag her. Honestly, neither of us was ready. It was so soon after Porter, but my gut wouldn’t let me say no. We picked Moxie up from DAS, and it was immediate foster fail. Moxie was dumped by her owners with a massive tumor in her mouth, and matting that normally can only be treated under sedation. We had her groomed within 48 hours and she was already a different dog. She had her tumor, and teeth removed; I think it was 9. Moxie now only has 3 canines and a few back molars, but that doesn’t stop her from eating her dry food. Luckily her tumor wasn’t cancerous, so we adopted her as soon as we could. I wasn’t letting anyone adopt her but us. Moxie is now the sassiest little sweetheart. We have probably let her gain about 1lb too many, but she is so happy. She brings us so much joy, and she 100% knows how loved she is.

How much I have learned about fostering, and the friends I have made. I met Jey C. Lehew when I picked up my first foster, and we have become extremely good friends. I have people that I will text or Facebook message weekly/daily that I haven’t even met in person. I love how supportive we all try to be to one another. We know that we are here to help these fur babies, and offer advice, send money, donate supplies; whatever we can to help other fosters out. If someone can’t get to a vet for an appointment, others step up. DPA is truly a team, and it’s done virtually. I am so honored and proud to be part of it.

What would be some words of wisdom to new DPA Fosters?

Even if you have done everything correctly to get your foster adopted, don’t be disappointed in yourself if something changes. My first foster was returned to me; and I felt that I had let Maisie down. It was so hard to get my head around that. These things happen, but don’t let it deter you from fostering again. Pay attention to the temp fosters in need, this is huge for DPA because there isn’t a HQ that houses fosters. The Facebook group is a wonderful tool; use it. Don’t forget to reach out to pick up supplies that have been donated. They are meant to be used, and there are lots of supplies. Use your resources, have fun, save lives.

I am a home healthcare worker for a family with a 25 year old daughter with cerebral palsy. She is wheelchair bound, tube fed, non-verbal, and one of my best friends. Also, I am pretty good at Chess.

Be Pawsome like Shana. Apply to be a Dallas Pets Alive! foster today!