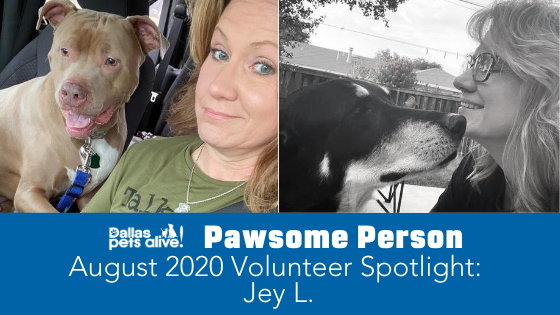 “As Assistant Director of Rescue, focusing on our partnership with Mesquite Animal Shelter, Jey hustles like no other to help us save lives. She’s always thinking outside the box, quick to respond, cracking jokes and keeping us entertained, and most importantly focusing on every single life saved. Jey also fosters for DPA and is quick to raise her hand to help in other ways as needed. Her energy and humor bring so much to our group!” -Elina D., DPA’s Rescue Director

Jey has been with DPA for the long-haul, 7 years and counting, and Jey has taken on many titles and roles. Read more about her below:

What does your role within DPA involve? What do you oversee within the organization?

A little over a year ago, I was tapped on the shoulder and offered the role of Rescue Assistant Director for our new partnership with Mesquite Animal Shelter. I was thrilled to embrace this role not only because I live in Mesquite, but it would allow me to be a part of the DPA Leadership Team – I knew this would afford me the chance to make a true difference at MAS and with the knowledge and tools of our rescue, potentially get them to be a no-kill shelter by 2025.

On the flip side of that, I also work as a kennel tech when MAS is short staffed so I am also a representative of the shelter and my community to DPA – they can hear from me firsthand what struggles the ACO’s are facing, what the public is perceiving and how MAS is able (or unable) to overcome these issues so that we know exactly what to address and how to prioritize it.

I am also a Foster Rep, a Foster Mama, New Partner Coordinator (for Boarding and Groomers), Rescue Coordinator and I have corrupted, um I mean, brought on dozens of new people to foster for DPA! One of whom is my step-daughter and she is completely obsessed with each one of her foster dogs!

What is your professional background?

I spent about 18 years in the media – news/sports/tv/radio. I was mainly behind the camera as a producer/writer/director/sports videographer but occasionally you would find me in front of the camera doing field shoots and sports highlights for the Dallas Cowboys, Texas Rangers and many many college teams. I retired from the media and became a consultant so I could FINALLY have weekends and holidays off!

How long have you been involved with the organization?

I started off with my first foster for Dallas Pets Alive almost 7 years ago.

What drives you to dedicate your time to DPA? What are you most passionate about at DPA?

What am I most passionate about at DPA? Anybody who knows me and is reading this right now is saying it – ALL THE DOGGOS!! Haha! I have three adopted rescue dogs that have become known as The Goon Squad and every foster that lives with us has an honorary membership into TGS automatically. Dogs are my oxygen and have taught me more about how to be a good human than any book, class or teacher could.

Not to take anything away from cats, but….

There will be heartbreak, fatigue, sweat, smells/substances/stains of unknown origin – but there will also be hysterical laughter, cuddles, adorable photo ops, companionship, unconditional love. It’s ok to feel discouraged or frustrated – just never give up on your foster animal because we are the ones who promised them a safe haven.

One of my favorite quotes ever sums up the wisdom I have gained by working in rescue – “The highest reward for a person’s toil is not what they get for it, but what they become by it.” (John Ruskin, 1819-1900) I am a better person for the work I do with DPA.

On average, how many hours per week do you volunteer?

It depends on the week, but especially over the last four to five months it is close to 30+ hours a week. If I am not working a paying job, I am at the shelter for DPA or getting info on the dogs/cats there for our foster albums. I am also networking them to anybody and everybody who will listen, as well as hitting up anybody I know with more than $2 in the bank for donations to our medical fund!

Tell us a fun fact about yourself.

A chance introduction to Chuck Norris’ niece, (who happened to be a costume and set designer for a few shows that filmed here in Dallas) led to me becoming a featured extra on the FOX network tv show “Prison Break” for 2 and a half seasons. Featured Extra is just a fancy term for a background actor that gets to say more than 3 words, but I got paid way more!

In one scene that took THREE HOURS to shoot, Robert Knepper (who played Theodore Bagwell) had to order a margarita from me on a plane, as I was playing a flight attendant. We both kept cracking up because we had been telling dirty jokes during the long break before we started shooting our scene. After he was able to finally say his line, we went and had margaritas as Esparza’s in Grapevine with Bill Fichtner and they both called me Mama Margarita the rest of the time we worked together.

Be Pawsome like Jey. Apply to be a Dallas Pets Alive! volunteer or foster today!