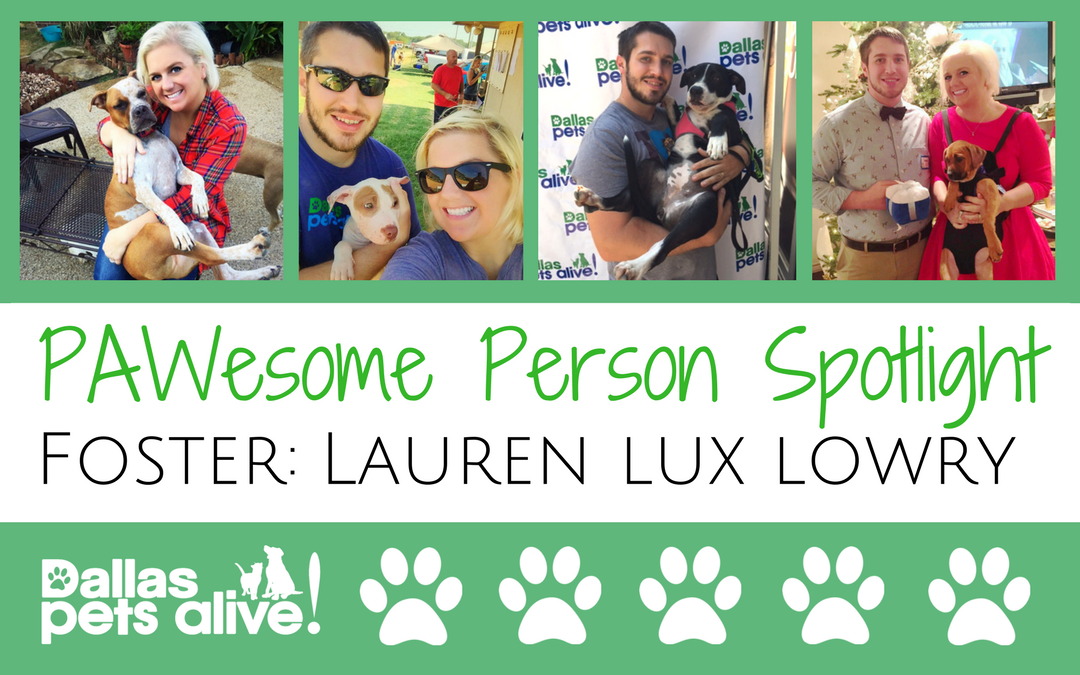 “Lauren and Austin are absolutely incredible people and fosters! They have been to hundreds of vet appointments, events, and meet & greets, dealt with more puppy poo than I can even begin to imagine, and oh, did I mention they have saved EIGHTY lives with Dallas Pets Alive?! Lauren and Austin are known as our “puppy gurus” and consistently pull puppies at risk of euthanasia from the shelter. Whether it’s taking on a single pup in need or a litter of 15, they don’t hesitate to do whatever it takes to save them all. Lauren also serves as our Assistant Foster/Medical Director; this real life Wonder Woman not only takes care of her crazy crew of puppies at home, but she spends countless hours supporting other fosters to help get their pups adopted as quickly as possible! We are endlessly grateful for all that she does for DPA, and are so excited to honor her as one of our favorite PAWsome people!,” says Allison Brandon, Foster/Medical Director of Dallas Pets Alive!

This is why Lauren Lux Lowry is one of Dallas Pet’s Alive’s PAWesome People! 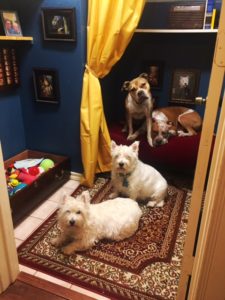 Franklin and Eleanor Roosevelt in their room with their fur siblings.

My sister saw there was a litter of puppies that were going to be euthanized in late December 2014. She asked if she could foster using my home since she was in an apartment. I told her it would be an around the clock thing, so realistically I would be the one fostering. We took all 10 of them in and it was a chaotic whirlwind we vowed to never do again… that was 70 fosters ago.

We have a lot to choose from. Our first litter was the “Hollywood Pups” they were GSD mixes who came down with parvo shortly after getting them into our home. They all went to the emergency vet and unfortunately 4 of them passed away around Xmas.
The most important fosters we ever had were Franklin & Eleanor Roosevelt. When I went to pick up other pups we had tagged at DAS I saw them rolling around just 5wk old puppies bellies full of worms but happy as could be with their current situation. I asked about them and came and got them two days later.

We fostered them for about five months. They attended my bridal shower, and were not allowed to be adopted while I was on my honeymoon. Austin would get tears in his eyes when they got applications. None of the adopters could separate them once they saw how close they were, so after a couple of people decided to pass we adopted them ourselves. I surprised Austin as our 3 month wedding anniversary. They recently celebrated their 2nd birthday and we created a bedroom for them in our new house as promised.

Either the Roosevelts adoption or we recently had a puppy named Link who was a beagle chi mix. The family that picked him has 7 kids and they have been wanting a dog for a really long time. We did the meet and greetss with the parents but the kids knew nothing about him. We surprised them with him one evening and the kids were so excited running around and some were crying. Then finally one asked “Do we get to keep him?” they were so excited just to have a puppy in their house they hadn’t even realized he was theirs. It was awesome seeing people/kids as excited as you would hope they would be about adding a new family member. We had gotten Link out of the shelter with Parvo just before he was going to be euthanized. To think this little 4 month old guy went from being almost forgotten to so completely loved was just the best. 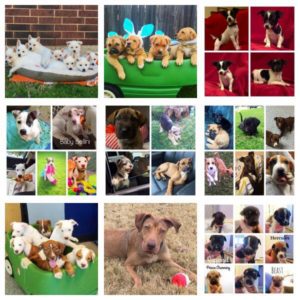 I love that it is an all volunteer rescue and no-one is getting paid. It is really important to me that everything we do goes directly to the animals. I wouldn’t want to volunteer my time or money if it was going to someone’s pocket. We do this for the animals not for recognition or compensation

I have a bit of an obsession with history and collect Presidential Memorabilia. Austin accepts and does a good job of pretending to care about this nerdy obsession- He let me name the Roosevelts. We recently bought a new house with acreage in Midlothian. We are in the process of converting the barn to house fosters in a temperature controlled environment. Once the barn is completed we are going to fence the entire property to keep the pups in. We have named our property Roosevelt Park since they inspired the whole thing 🙂