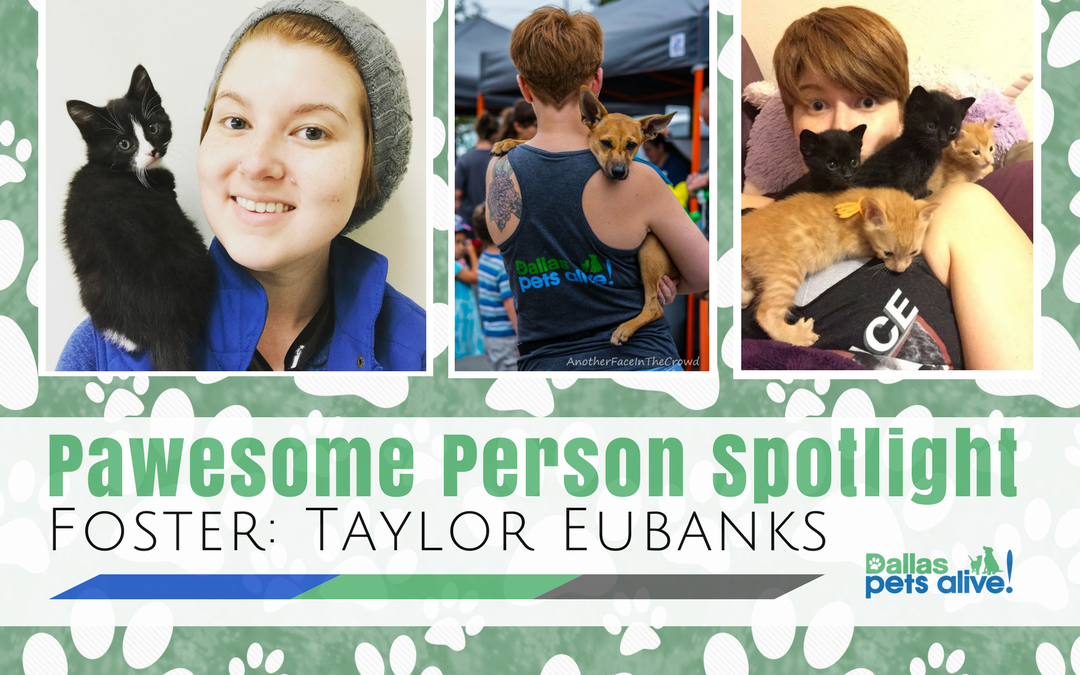 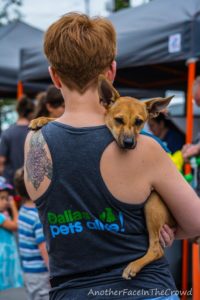 “Taylor is such an asset to our foster team! She and her husband Tommy have fostered multiple dogs, but they are also some of our coveted kitten bottle feeders! Taylor is a bottle feeding machine, taking in motherless kittens so young, they can require feedings every few hours. She is always willing to sacrifice sleep (and as she says, sometimes her sanity) to save these tiny, vulnerable lives! The shelter does not have anyone to care for high-risk kittens overnight, so when they wind up at the shelter, we need someone to take them immediately; Taylor never turns down an opportunity to help! We can’t thank her enough for her commitment to getting our kittens healthy and ready for their forever homes!”, says Allison Brandon, Foster and Medical Director for Dallas Pets Alive!

This is why Taylor Eubanks is one of Dallas Pet’s Alive’s PAWesome People!

I’ve always been interested in animal rescue and bottle fed several litters of kittens with my mom as a child. Then Tommy met Max, and I found out he worked with DPA. The rest is history!

We’ve fostered 5 dogs (and only kept one!) and 14 kittens (including the 5 I had right now) since joining forces with DPA in 2014.

Bucky was a three-legged terrier mix that I knew I had to bring home the moment I saw him at Dallas Animal Services (DAS). I’d promised Tommy (my husband) we wouldn’t foster anymore dogs after we “foster failed” with out last puppy, Petey. SO, I was at DAS doing dog testing with a friend and turned a corner and saw Bucky and immediately let out a high pitched squeal. He was the happiest, wiggliest puppy ever, even with a leg missing. I immediately sent Tommy and picture and begged to bring him home. He left with me that afternoon. 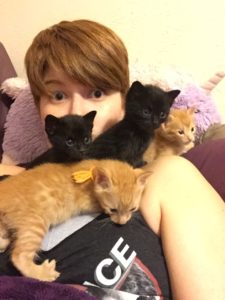 Taylor with four of her bottle baby kittens. Can you say, kitten scarf?

My first venture into bottle feeding kittens with DPA is a fun story! It was 5:50pm and I was checking facebook before leaving work when I saw a plea for a bottle feeder. There was a litter of 4 kittens at DAS that needed a foster by 6pm. I messaged Elina and told her if DAS could wait for me to get there after work, I’d take them.
Tommy called when I was on my way home from the shelter to see what I had planned for dinner….
Me: Oh, nothing yet. I had to run an errand for DPA and I’m on my way home from DAS right now.
Tommy: Oh, okay.
Me: Okay! By the way, I have a surprise for you when you get home.
Tommy: Really? Cool!
…
Tommy: Hey, I’m home!
Me: Hey! Come see the surprise!
**Mew! Mew! Mew!**
Tommy, Wide-eyed: What did you do…
Me: But we saved FOUR lives!
Tommy: THERE’S FOUR OF THEM?!

Our first foster, Roxie II (now Bella) is probably the most rewarding and has the happiest ending. This puppy was scared of everything. She cowered in her kennel for the first full week we had her. Bella was so timid, but turned into a different dog when I took her outside and she got to play with other dogs. Her adoptive family turned out to be the most perfect couple, ever. They fell in love with her, despite her timid nature, and even had another dog for her to play with. Now Bella is a happy puppy, and though she is still timid, she’s come out of her shell a LOT thanks to the patience and persistence of her new family. They love her so much and I love seeing her updates on facebook! 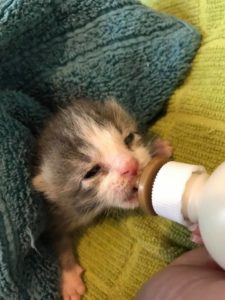 Seriously, nothing is more rewarding than seeing these little darlings thrive!

My life-long dream has always been to rescue animals, and I’m currently living the dream! Also, I’ve literally had at least one kitten under the age of 3 months in the house at all times since September 2016 — CHILDHOOD DREAM COME TRUE!

I have 3 dogs – Maks, Marley, & Petey, and 2 cats (both bottle babies!) – Bruce & Isley. Petey, Bruce, and Isley are all named after comic book characters.

I’ve been riding horses for 21 years, and Petey often accompanies me out to the barn (Yes, I bring a chihuahua-thing to the barn with me! He loves it!)