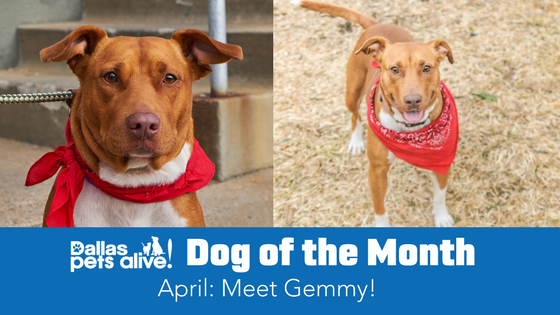 You: An open-hearted, patient dog-lover who has time for doggie parks, defines yourself as a morning person and seeks true companionship.  Her: A loyal, curious, gentle and social canine topped off with a fun, quirky sense of style looking for a forever home.

Meet Gemmy, a six-year-old, female American Staffordshire Terrier/Lab mix!   Gemmy has a reddish-brown coat with a white bib and paws and a fashion sense that extends to red bandanas, pink shirts and aviator glasses:)  Gemmy was surrendered by her owner and living at the Dallas shelter when Dallas Pets Alive found her and placed her into a loving foster home.  And now it’s time to find her a forever home.

You should be aware that Gemmy loves mornings.  She wakes up ready to take on the world with enthusiasm and energy, bringing life to her sleepy household.  She also has the unusual habit of falling asleep sitting up! (Maybe because she used up all her energy in the morning?)  Whoever adopts her should enjoy laughing at her antics and be willing to socialize with many other dogs and their owners at doggie daycare and dog parks where Gemmy loves to endlessly wrestle and chase other pups.

Gemmy needs someone patient to help her trust people, especially men and strangers, and to feel comfortable walking on a leash.  Her ideal home would be one with another dog or two for playmates. (Gemmy prefers that no cats are living with her.) Her foster says she will be a wonderful, loyal companion if given some time to adjust to people.  If Gemmy is your idea of the perfect match, apply to adopt her today! Now through April 30 her adoption fee is 50% off.